Change of plans as we don’t forget our plans on making a separate video review on both the Evogear EXPS3 and the GHK Mk18 GBBR replica. 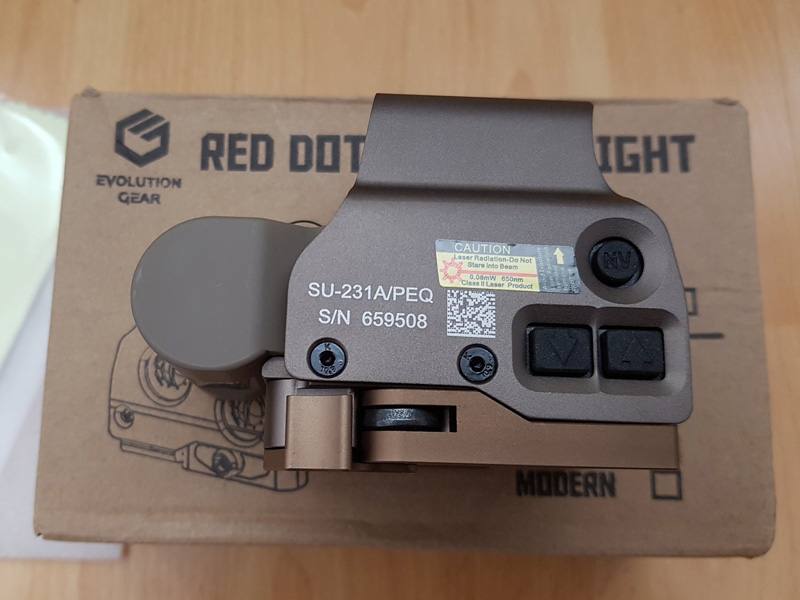 But we wan’t to give you a review and our thoughts about the new 2020 version of the Evolution Gear EXPS-3-0 holosigt replica.
First of all why I call it 3-0? Did you guys know that after the number there is three different number could pop up. The 0 means, that we got only one dot in the middle of the aiming circle. Which is usually effective for 0-300m aiming. The next version is the 3-2 model in this modell, we have two dots one for until 300m and one ~500m shooting. And the last version 3-4 which has 4 dots and could be good even for 600m targets down range. I attach a picture about the different dots. In my opinion for shooting 300m plus with this sight you must need a G33 magnifier to effectively use the 3-2 and 3-4 sights. 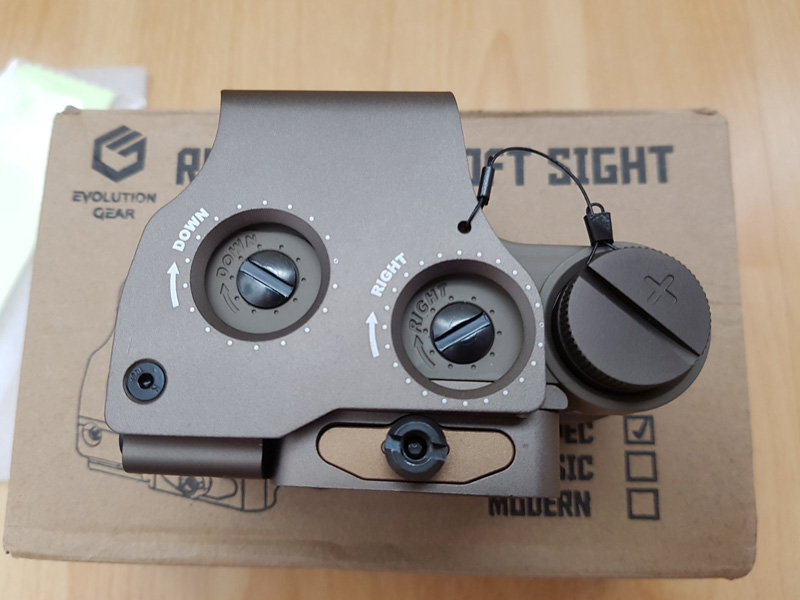 But enough with the real deal datas as we are dealing with an airsoft replica here. But could you say that just by the looks? You may be suprised!

The Evogear EXPS 3-0 replica has an exellent looks. And I say that with confidence as I had the opportunity to own the previous version which has that large battery cap and had 3-2 stlye dot inside the reticle. Compared to that this new one has more simple in the dot format (3-0) which is perfectly fine for airsoft, also the overall picture is much better. 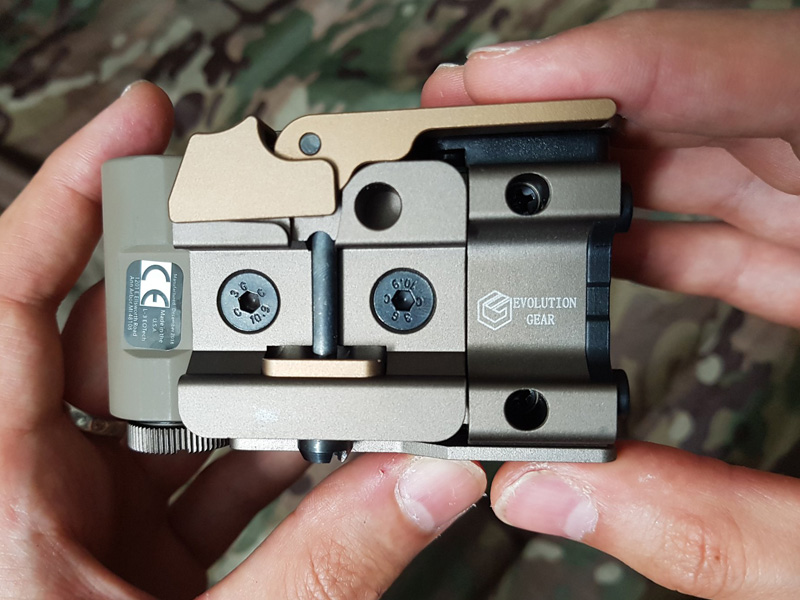 What I liked the most is the much less reflective back glass which is a great improvement over the old version. The other big update is the battery cap every gun enthusiast or hardcore milsim reenactor could tell the difference between the real and the replica sight based on taking a look on the battery cap. As the old one (and many other repro) has large inaccurate cover. Which is corrected with the new series (2019 and 2020 version) 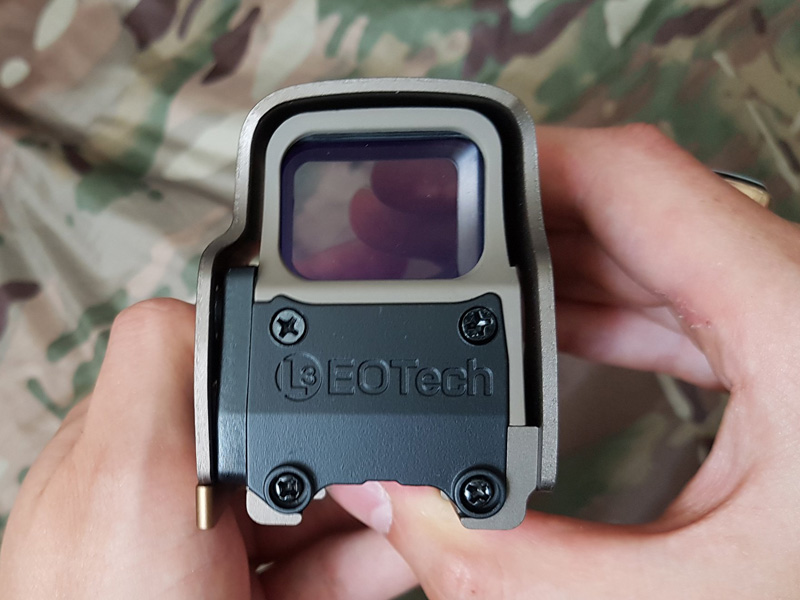 The 2020 ver compartment houses a smaller CR2 battery instead of the CR123! After the first startup or battery change it need a small time like 20-30 sec while the aiming sight become cristal clear. I don’t know why but this is not a big issue as if you use it without changeing the battery this won’t be an issue as it always appear fine during continious useage. 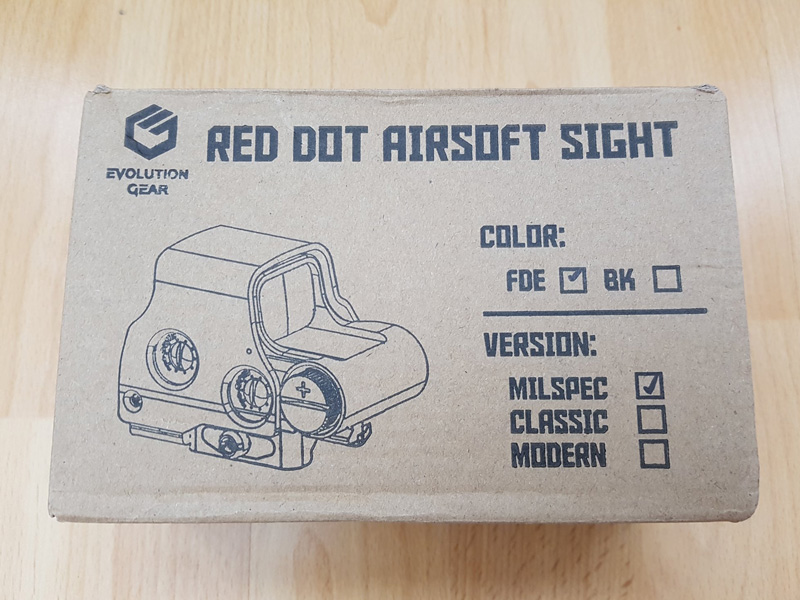 Also an FYI in the first startup you need to push the NV button first then the + button with several times but the manufacturer mentions this in his page! So keep this in mind!

And if I mentioned the buttons. These new ones has became much better compared to the old soft rubberish buttons which had little resistance. These new one has a solid click every time you pushes them which adds to the realism.
Okay let’s see what we got in terms of paint an outer finish! The DE color improved a lot compared to the cheap looking champagne metal color of the old version. This new Mil-Spec marked one that I own is on whole new level. I’ve seen the Mil version several times in pictures used by a 75th Ranger Regiment and Special Forces Group operators or various other SOCOM element like the USAFSOC TACP or CCT. The coloration is looks exactly the same. If some hardcore eye for the detail guy found a difference then he has my respect!

About function we have no longer a color change ability with the push of the NV button instead we got a real Night Vision mode which I haven’t tested out yet. But seeing pictures by Loken replicas I was convinced that this function indeed work with this device. So this is good news for those who use NVG for bigger airsoft or milsim events.

A big thing which also worth to mention that this 2020 version is different compared to the 2019 version is the corrected 30 minutes auto shut down function which was the biggest downside of the previous version. Also it can endure the GBBR impact force better compared to the old one.

But let’s see that small minor negative thing that I need to mention, so you don’t think this is a payed review! :D
The only really and really minor downside of this 2020 version is the brightness power. Don’t get me wrong it’s works really fine even in sunnier days I just simply feel that I can endure bit higher power of brightness. But this maybe my personal preference. And of course the price which is much higher compared to the old version, I understand that the new production has higher cost with the better built quality yet 100 USD would be a bit better. But with the increased prices of production I can understand the manufacturers concerns with the higher price.

Overall I’m very happy with Evolution Gear’s new EXPS replica which I long wanted with the Mil-Spec marking for my 75th Ranger loadout. Also Evo’s service seems better than ever. Shipping was fast even with the Covid 19 situation! So in the end if you looking for the best looking airsoft EXPS3 holosight replica then Evolution Gear that we recommend for this!

If you want to order the Mil-Spec version from the review:

If you are more of an oldshool fanboy with the old logo:

Or if you vote for the modern "Hipstertech" marking: 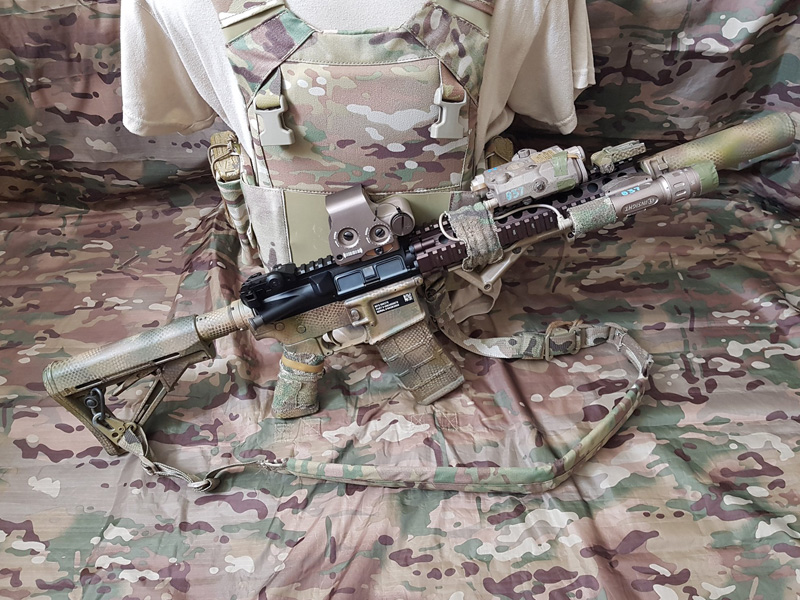 P.S.: Try to include a short video about the dot as the picture don't represent how clear the reticle can be.

Also stay tuned for the video review with the GHK Mk18 mod1! ;)
Hungarian version also getting ready during this week!